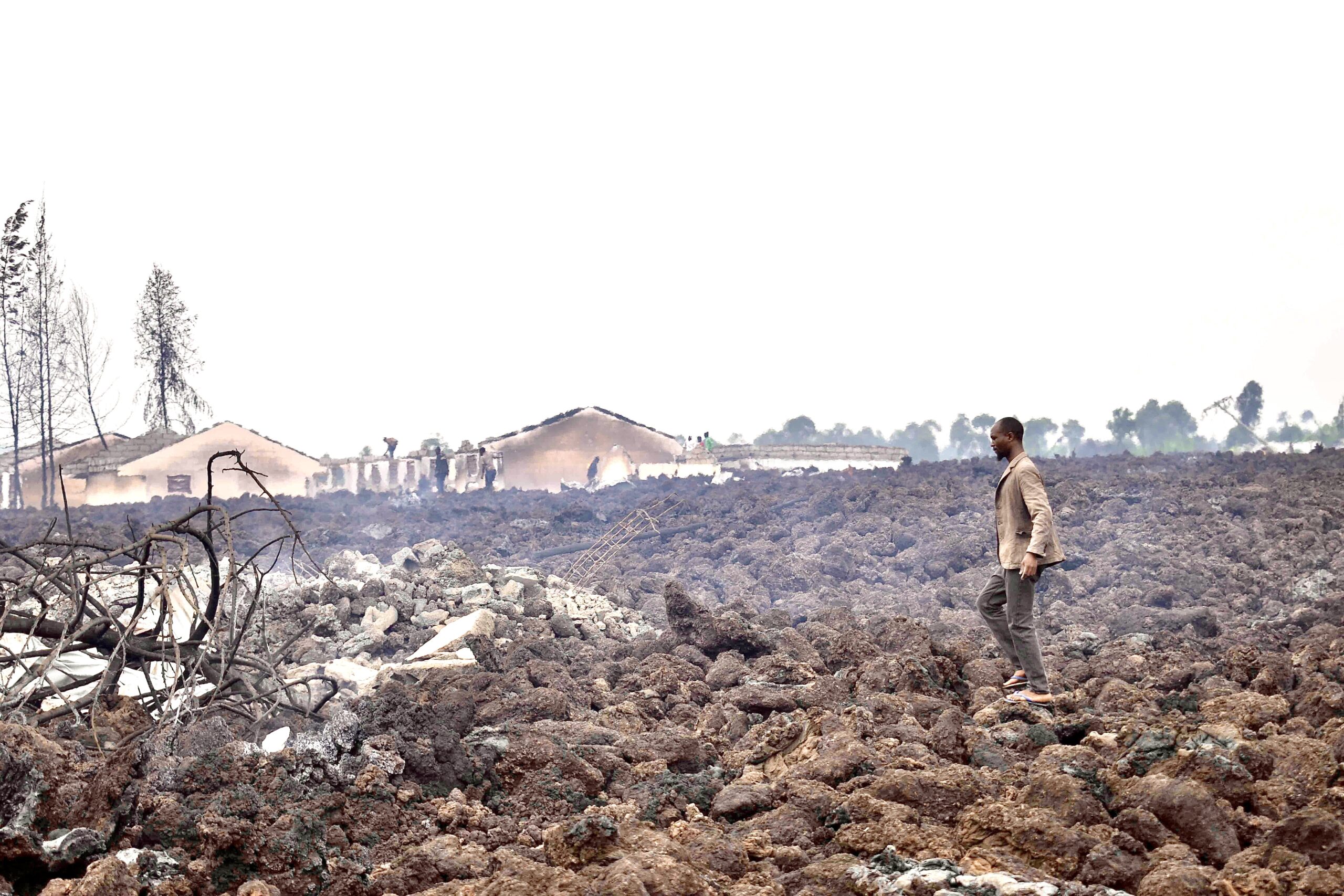 On 22 May, at around 7pm, Mount Nyiragongo erupted, sending lava streaming towards the city of Goma (only 12km away) and leading thousands of people to begin fleeing the city.

Thankfully, this time the lava flow stopped on the outskirts of town, but there was still significant loss. The lava destroyed 17 villages, three health centres, a primary school, and a critical water pipeline. Thirty-two people were killed, thousands left homeless, and hundreds (including over 100 children) were separated from their families.

In the days that followed, strong aftershocks shook the city (destroying several buildings) and fissures began opening up under the city’s streets.

On 27 May, authorities announced the forced evacuation of around 400,000 people from Goma due to the risk of further eruption.

You can find more details from those initial days of the crisis in this article from last month’s Love in Action newsletter.

We have since connected with them both and we can praise God that no-one from either partner has died. Five people from HEAL Africa and two from Ephphatha lost their homes and belongings in the lava flow and two of Ephphatha’s buildings were damaged.

During the night of the initial eruption, HEAL Africa evacuated many of their hospital patients to other hospitals, church buildings and ‘safe houses’ in areas west of Goma. They also evacuated their sensitive equipment and some of their most critical medicines.

Some patients couldn’t be moved so a number of HEAL staff remained with them. The hospital continued functioning on an emergency basis, performing only emergency surgeries and serving outpatients where possible. Unfortunately, HEAL’s mobile surgical team was stranded in another province while the Goma airport was closed but immediately returned once it reopened.

During the period of forced evacuation HEAL continued seeing to the patients in safe houses, providing food, clothing and medical follow-up before helping them return to Goma once they were allowed.

With all official communication coming via TV and radio Ephphatha provided critical support to the deaf community during this time by sharing important updates and official mandates through WhatsApp and text messages.

On 7 June, seismic activity began subsiding and the Congolese government announced that Goma residents were allowed to return.

Right now, all HEAL Africa’s staff and patients have returned and the hospital is back to functioning as usual. HEAL staff are continuing to work to reunite children that are separated from their families. They are also hoping to set up a trauma centre to provide counselling and support for those children still with foster families, as well as those that have been reunited but are still dealing with the trauma of the separation.

Ephphatha’s medical centre and schools have now reopened. They are assessing the damage to their two buildings, and it looks like that they will only need to repair rather than rebuild.

There has been terrible tragedy and hardship, and this is still an ongoing humanitarian crisis. But there is a lot to praise God for in this situation, especially given how catastrophic it was in the first weeks following the eruption. We can praise God that he spared the majority of the city and also that the UN and humanitarian agencies have been able to respond so well.

We have seen Christians around the area stepping up, housing and feeding displaced people and taking people into their churches. It’s heartening to see how God has been working and people have been walking in faith in such a horrible situation.

Please continue to pray for those who have been affected including those who lost their homes in the lava flows and pray for the safety of people as they return to the city. Continue praying for the challenges that the people of Goma face every day, but especially at this time of upheaval, including the threat of violence from rebel forces, shortages of clean water and the risk of cholera outbreaks, as well as a 3rd wave of COVID-19, which has been their worst yet.